However, you have to be careful with sweeteners as some of them are quite harmful to your health.

For example:
Saccharin – “Saccharin is the oldest sugar substitute around; you probably know it as Sweet’N Low. It was discovered by a chemist in 1879 and became a popular additive in the 20th century. As early as 1911, though, there was already an effort being made to ban it due to its potentially unhealthy effects.

Aspartame – “Aspartame was also discovered by a chemist; you probably know it as Equal and NutraSweet. It’s found in thousands of food and drink products—namely, diet sodas. Studies have shown that it can cause imbalances in your brain; aggravate migraines; and affect your nervous system, your moods, and even your quality of sleep.” He goes on to say one study found a connection between aspartame consumption and seizures! And some researchers have noticed the rise in brain tumors since the introduction of aspartame….just sayin’!

Sucralose – “Sucralose is found in more than 4,500 products on supermarket shelves, including Splenda. Also discovered by chemists, this sugar alternative is 600 times sweeter than sugar. Scientists at Duke University recently revealed that commonly consumed amounts of sucralose reduce the amount of “good” gut bacteria by 50 percent. Gut bacteria are essential for promoting a healthy digestive system and regular bowel movements, which help you get rid of false belly fat.” He goes on to say that sucralose produces significant weight gain in studies, and it contains chlorine! Why would you want to put a pool cleaning ingredient into your system? It could damage your organs and reproductive functions as well!

Werther’s Sugar free Candies are great because they contain Isomalt. But don’t eat too many in a day or they may act as a laxative. 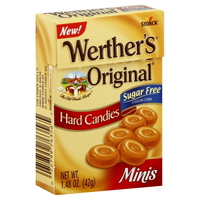 Although Isomalt does contain calories (1/2 that of Sugar), your body doesn’t convert it to glucose in the blood, so is good for a low carb diet. And also suitable for diabetics.

Technical stuff on Isomalt – via http://www.wisegeek.com

Isomalt is a sugar substitute and a sugar alcohol that is processed from real sugar made from beets. The German company PALATINIT, founded in 1979, manufactures it. Isomalt was made by the early 1980s but not approved for use by the US Food and Drug Administration (FDA) until 1990.

In some forms Isomalt is blended with other non-sugar sweeteners like sucralose so it has approximately the same sweetness as sugar, but does not bake or quite react in the same way sugar does. For instance you can’t caramelize isomalt. Further, a few forms of isomalt sold for baking, like Diabetisweet, are often quite bitter. The treatment to granulate isomalt involves treating the sugar with acesulfame potassium, and results in an undesirable taste.

Nevertheless, it’s quite common to find isomalt used as a sugar substitute, particularly in sugar free or dietetic foods. Unlike regular sucrose, isomalt does not tend to raise blood glucose levels and is considered safe for consumption by diabetics. Animal studies with suggest the product is not carcinogenic or toxic.

Another great sweetener is Xylitol. This also doesn’t have an impact on blood sugar levels, is very safe and fights tooth decay.
It is just like Granulated sugar and can be used to bake just about any cakes except recipes that need caramelising (Burnt sugar).

I use it all the time for baking cakes. You can even make meringues with it. Great low carb treats. They will seem soft when cooked but as they cool, they go crunchy.